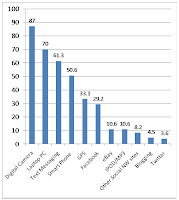 Business, gaining prospects, on-line networking, talking about what you do…does it all fit together?

From my most recent association member survey conducted in June, I learned something surprising. While the Young Professionals segment (gen x and gen Y) fall into the 20% range of the total association membership, 38% use some kind of social technology!

Could that mean that the boomers and even civics are beginning to adopt to this type of technology to make more connections?

I continue to get feedback that confirms this trend. While teaching a writing class at an association this week, I asked for a raise of hands for those who use social networking technology – either facebook or Linked In (specifically). While about 20% of the class said “yes”, at least five were tenured professionals.

Joe, a 63 year old veteran commented he had received four leads from Facebook this year. Honest! He acknowledged he has been referred to as ‘you dog’, but never call him an old dog. Joe, and others have begun to realize online is a place where people can spread their word, and without a single advertisement, it can lead to new prospects.

Number of items in cart: 0